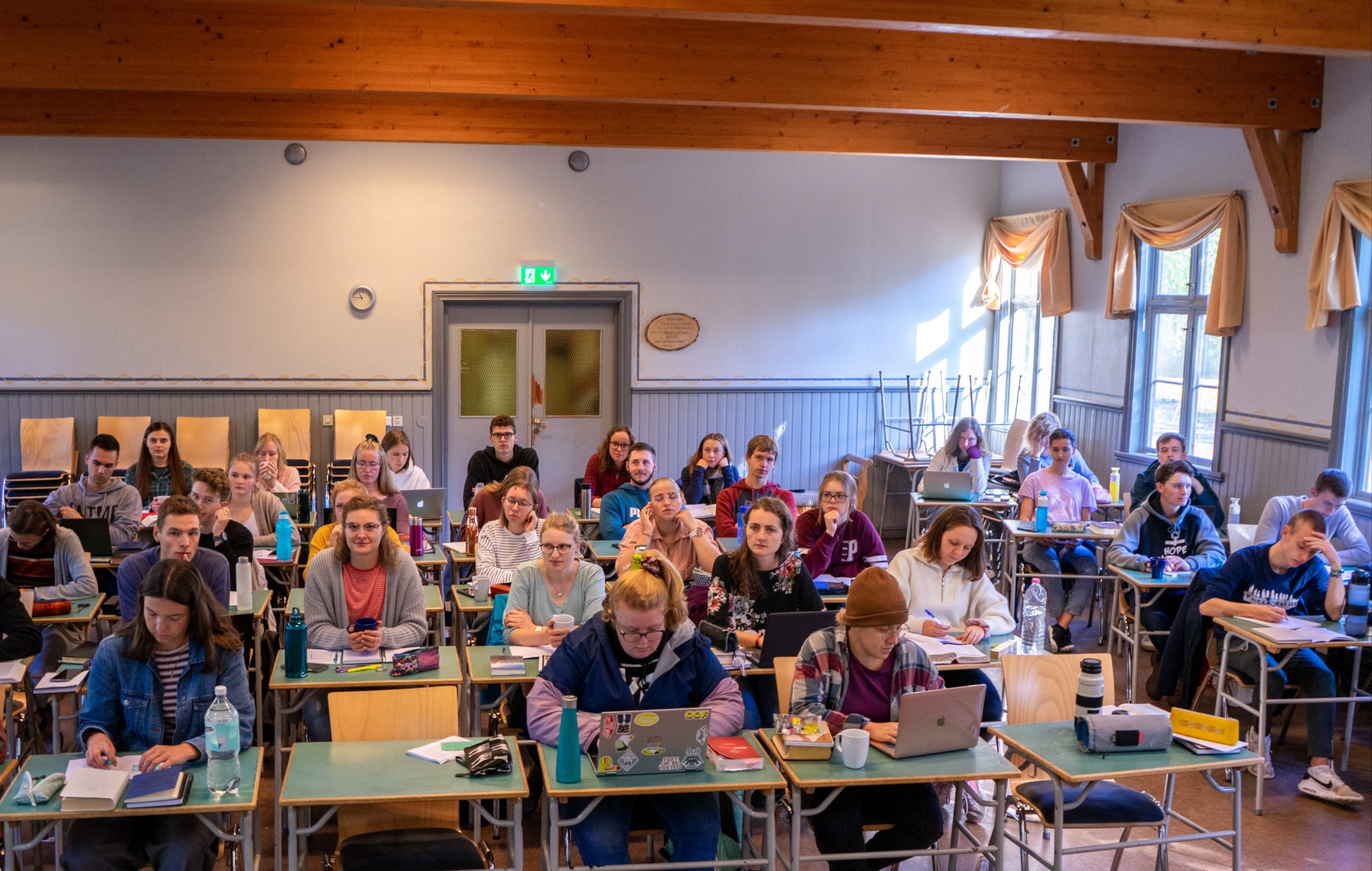 The fifth week starts off with my birthday! On Monday October 19th I celebrated my 22nd birthday, this was also one of the reasons why Sabine visited last weekend. This week we had lectures from Wally Schoon, yeah you guessed it right.. a Dutchy! Well at least from Dutch descent. Wally grew up in the United States and moved to Sweden to be the Director of Torchbearers Sweden, now surpassed by Luke Thomas. By now I started to get the hang of things and know how to schedule my week, however this week I had two worship services that I participated in and thus had a lot of practice that took a lot of my time this week. I haven’t played Cajon in a long time so it was fun to pick it up again! I also had zero experience with playing in a band but everybody was very patient with me and helped me a lot, which is something I am very thankful for.

Every Thursday we have intramurals. Phil, one of the Staff members, organizes them and for the past four weeks we have had soccer games. He made 4 teams from all the students who signed up and I was put in team United States and we won the competition!

This week we had lectures from Omid Pasbakahsh, a former muslim who turned to Christ and specializes in apologetics. In these lectures we learned about Islam, Atheism, Roman Catholicism, the Word of Faith movement, Prosperity Gospel, Jehovah Witnesses, the Holy Trinity, and comfortable Christianity. For most of these subjects we also got taught apologetics in defense of the Christian faith.

This week we also had Höstfest, a Swedish celebration of the fall season. This was also a substitute for Thanksgiving that the Americans and Canadians would normally celebrate. Everybody dressed up more fancy than usual and together with our family groups we ate really good food prepared by the kitchen staff. After we were done eating we had some performances by a mixture of staff and students. For example Alicia, one of the students, played a song on her cello. Ben, Addy, Wally and Donna sang a Swedish song called “Tack Tack Jesus” and we also had a little improv drama where I pretended to be a host for my family that would come over for Christmas who I had not seen for a long time and thus had forgotten their names. So I had to guess who each of the students were by who they imitated, the tricky thing was they were all doing it at the same time. We ended with a great dance party with a nice variety of party music from the Netherlands, Germany and North America

Face to face with Jesus! This week’s lectures were given by Jonathan Miller, we read through the book of Luke and Jonathan taught us about what we could learn from every encounter people  had with Jesus.

Travel weekend! At the end of the week we had from Thursday till Sunday off. Normally people would explore different parts of Sweden or travel to Norway, or go up north to try and see the northern lights, but due to covid-19 there was not much traveling going on except for a group of people who went to the  Baltic Sea on the east coast. A lot of people just stayed at Holsby and caught up on assignments or watched movies, for example me and some others watched the whole of The Lord of the Rings trilogy (extend edition ????). On Thursday I also organized a Dungeons and Dragons – Lord of the Rings game, we got pizza and snacks and had a great evening! For me this weekend was a nice little break from all of the intense Bible studies and lectures.

This week we had lectures from Luke Thomas where we went through 1st Kings. Luke talked about how God always keeps His promise, how the life of the king is suggestive of the life of the people and how we should be following Jesus Christ our King and much more.

Every Wednesday we have a weekly Galatians study, this study is made by Timothy Keller. My group consists of 6 students and one staff member, every student has to prepare 2 weeks and this was my second time preparing. In this study we worked through the book of Galatians very carefully by answering questions and discussing the answers together, after which the leader reads Timothy Keller’s answer on the question. In one of these notes I got an answer on something I had been struggling with for a while. After the first couple of weeks when we did most of the activities we got more time to study and read the Bible, but I quickly noticed I didn’t really enjoy reading it. I expected that I would come across this dilemma during my time here at Holsby even before I signed up, but I got an answer through this verse.

But now that you know God—or rather are known by God —how is it that you are turning back to those weak and miserable forces? Do you wish to be enslaved by them all over again?

One of the main themes in Galatians is works of righteousness, I had been convinced I could force the growth of my relationship with God by gaining knowledge and getting to know him through reading the Bible and expecting I would feel closer to God after doing so. However, I have nothing that I can bring to the table concerning my relationship with God, and I was enslaving myself to feelings that I saw as an indication of the status of my relationship with God. Knowing the context of this verse, Paul is telling the people of Galatia that you can not be saved by works (like these people it is not necessarily that I am trying to save myself, but more about serving something else than God, in my case a feeling). This is because it is not as much about you knowing God but about God knowing you! God loved us first! Letting go of this resulted in me approaching the reading of the Bible in a more relaxed way and I have started to enjoy studying it.

I can only put so much of this experience in to words, if you have any questions please e-mail me at douwepausma@gmail.com