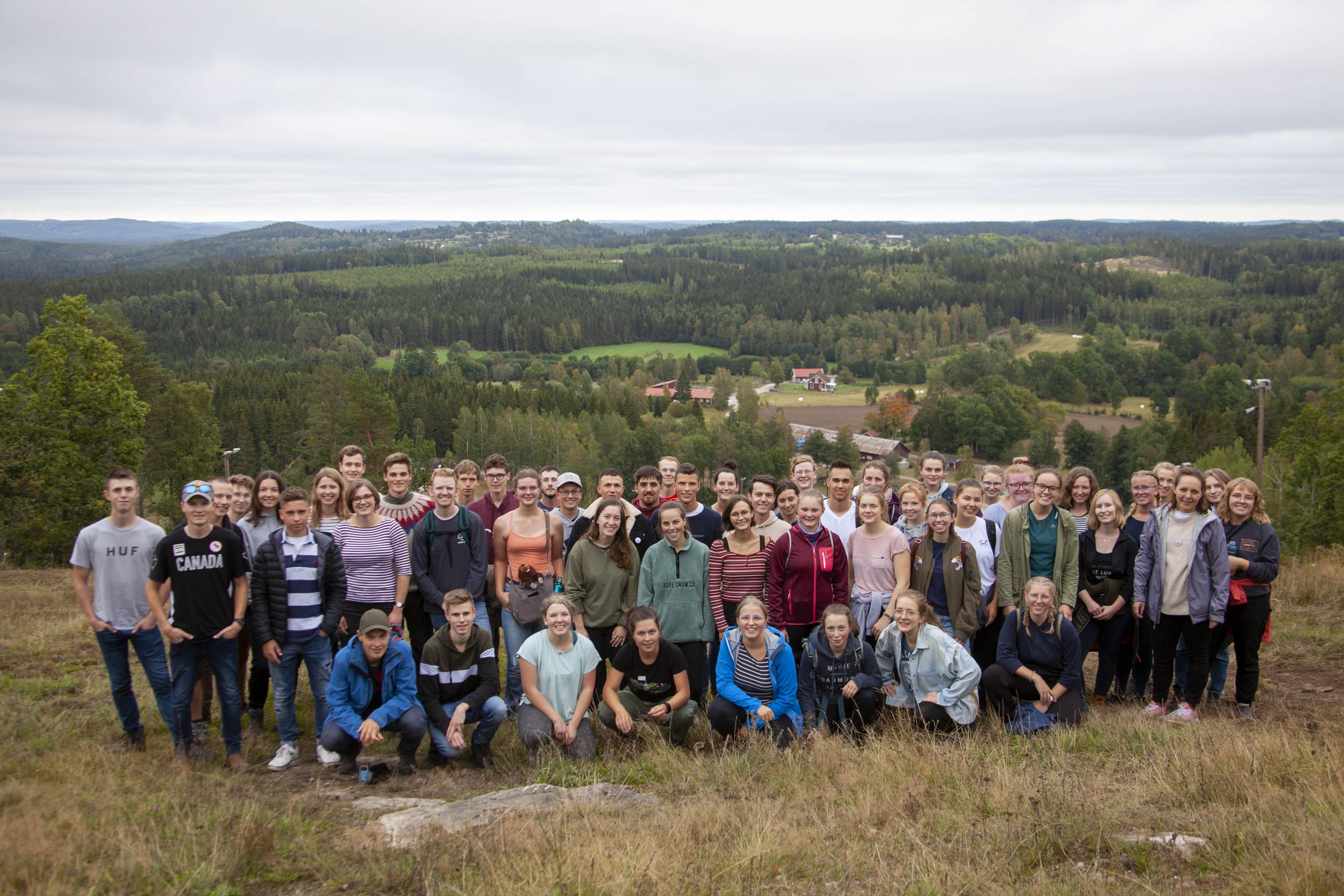 Friday September 18th 2020 Bible school started! After a long train ride from Stockholm to Vetlanda I got picked up by Tim Dueck, my RA (Residential Assistant). Tim lives in the same building as me which is called Ekhaga. Ekhaga is the boys dorms where I was assigned room 14, I live there together with Michiel Pater ???????? and Philipp Sinn ???????? two very nice guys looking to learn more about God and His word. Everybody was very open and inviting right from the start.

As a group we grew close pretty fast, everybody was open to each other and as a result we started to trust each other fairly quickly as well. The first week was mostly introduction about the rules, assignments, schedules and how things work in general, we also got a little student handbook where most of this was explained as well. In the beginning of the week we hiked to the top of a ski hill, while we were hiking up the hill, Luke Thomas the director of Holsby played his bag pipes until everybody reached the top. When everybody was at the top we took the picture that can be seen at the top of this article.

In week two we had our first lectures, this lectures series was called God’s Big Picture and they were given by Luke Thomas and Jonathan Miller. I believe the main purpose of the lectures was to set a foundation of knowledge about the Bible and get everybody on the same page. In these lectures the Bible was split up in different kingdoms, each kingdom was named after the status of God’s covenant(s) with Israel and the gentiles throughout the Bible. These kingdoms were lectured in the same chronological order as they are presented in the Bible. In the middle of this week we did a ropes course, the course itself is here at Holsby and was a lot of fun and challenging

ESAW! ESAW stands for Explore Sweden Adventure Week, the first two days of this week we went on a canoeing and hiking trip. On Monday we went canoeing, we left early in the morning and there were some incredible views of the lake with an enchanting mist around us. There are some picture of the canoe trip on my Instagram. Sometimes we had to do a portage and half way through the day I fell in the water at one the portage points so that was not so nice.

On the second day of ESAW we went hiking with a compass and a map, which was a lot of fun. We had to navigate through the forest and get from checkpoint ikto checkpoint by setting our bearings and following the compass.

After the two days of ESAW we had lectures from a different staff member every lecture, who told us something about their life and their experiences with God. For example one of the lectures was about all the ways you can spend time with God, given by Trista Miller.

The fourth week was a busy but really nice week, now many of the organized activities are done and we started to get in to the standard week schedule with lectures, outreach, testimonies etc. This week the father of Luke Thomas came to give us lectures his name is Chris Thomas and he is the son of Major Ian Thomas, the founder of Torchbearers. Chris Thomas taught us a lot about social relations between husband and wife, child and parent and also between Christians in the Church.

At the end of the week my sister Sabine came to visit! It was really nice to see her again even though it had only been a month. After I showed her around Holsby we went to go hiking in the nearby forests and I took her to see a nearby lake. She came to stay from Friday till Sunday and we had a great time together! I was so thankful that she went through all that effort to come visit me.