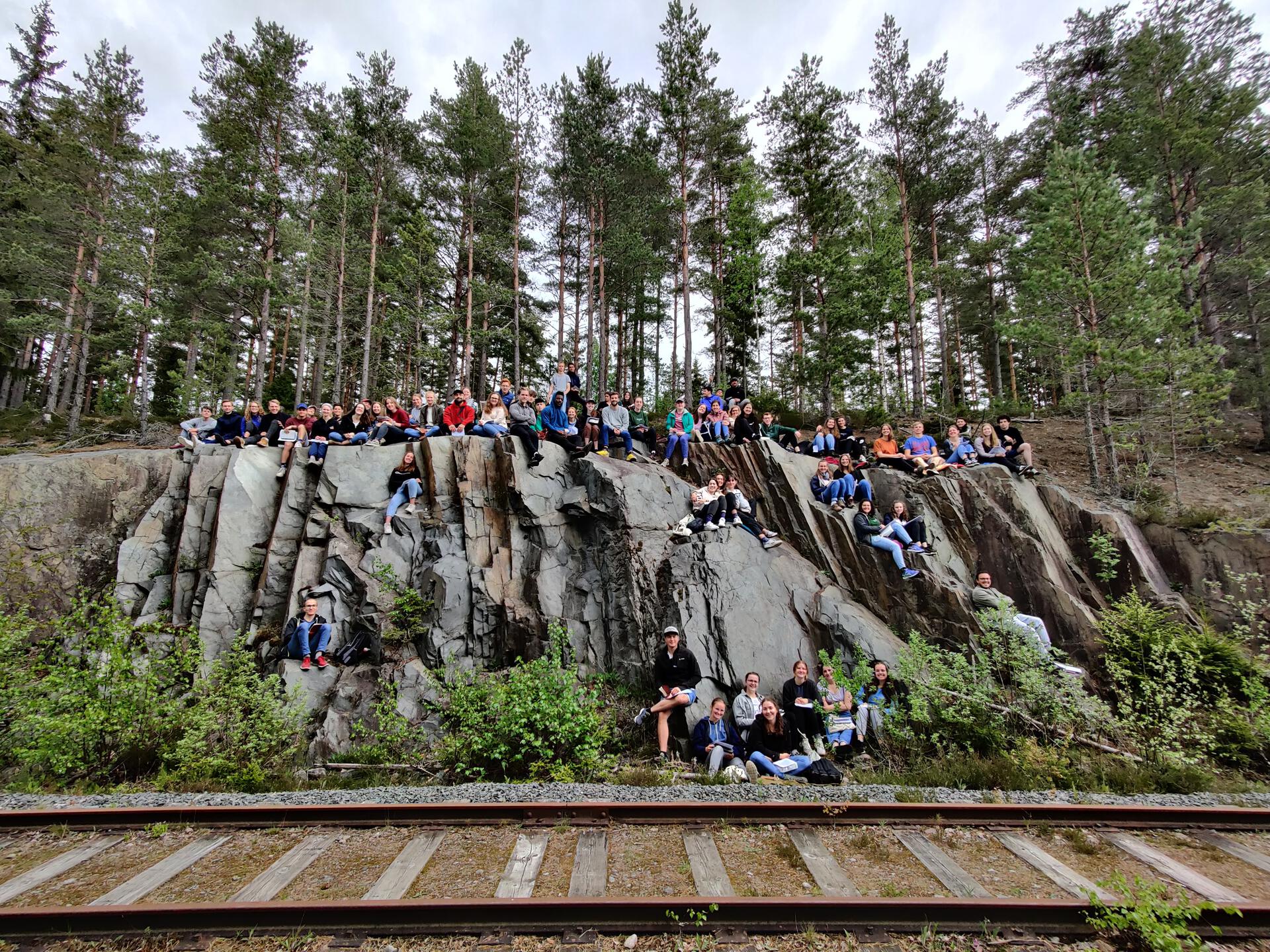 This will be my final blog about my work at Holsby as my time in Sweden has come to an end. It’s always fun writing these blogs as I get to look back at the last month or term and be filled with thankfulness for it all. Anyways I still have a couple months to catch up on so let’s go back to April where the Spring Term started.

Spring term starts off with a challenge, I am going to give a sermon! As I wanted to make no mistake and had very little experience in giving sermons (except for that one time in my Church where I co-preached with two of my friends) I was very thorough and spent most of my Spring break preparing for it. I gave a sermon about about ‘Understanding’. This is an incredibly broad topic because you can go in so many directions with it. In short: I present three topics related to understanding, the definition of the word understanding, the state of our hearts, and the Holy Spirit. I finished the sermon with the idea that sometimes we don’t understand and that’s okay, but having faith does. I might post the sermon on my blog in the future.

Like last year we went on a Spring retreat to Flögens. I got to lead a bike trip and a canoe trip and the latter of those two was quite chaotic. It happened to be very windy that day and we noticed that right away when we entered the lake. This caused us to reorder some people in canoes so that everyone was able to cross the lake to the river. When we got to the river all was fine, but this river ended up in that same lake again. However it seemed like the wind had gone down and we were able to paddle calmly across the lake.

A bit of context: the route was planned like a scavenger hunt. We skipped the first two clues because it was so windy on the lake at the beginning. The wind had gone down so we decided to get those last clues across the lake anyways. We we’re holding each others canoe as we we’re waiting for the people who got the second to last clue. Then the wind started blowing harder than before. And all of a sudden two big waves came. We were able to stay a float, but a canoe a couple dozen meters away tipped. Something happened that I dreaded the most, a canoe tipped on the lake.

I’ve led a couple canoe trips and this one would be my last. So far people only had tipped in rivers, which is not as big of a deal as most time you can stand, this of course helps to right the canoe. Tipping on a lake is a different story. You will have to perform something called a ‘T-rescue’. Now even though this would be hard it would a have been possible, but with the white capping waves and the wind making us drift apart we could forget about it. Luckily we drift toward shore which made them able to stand and right the canoe there.

In the meantime I and 🇩🇪Debbie my canoe partner drifted into the rocks which. This was quite thrilling as we were dodging rocks while being pushed by the waves. We headed straight for a dock with to much speed and after I shouting ‘brace for impact’ we hit the dock and tried to hold on. But the waves swept the canoe from underneath us and we tipped as well. The water definitely was cold but the shock of tipping and trying to make sure none of our stuff would float away kept me distracted. I had never tipped in a canoe before in my life so this was a first.

As the other canoes I past us I signaled them to just keep going. It was only a matter of time before another canoe tipped. We pushed our canoe out of the rocky area. I climbed on a rock and jumped in. We paddled against the big waves until we could go in straight line towards the last(first) clue. At this point we had the wind in our backs. We could feel the waves lift us up and push us forward. It was as if we were surfing Debbie said. I think we did 300 meters in a minute.

We made it, everybody made it. What and adventure, I felt like I was in a movie. We were all laughing about the whole situation. It’s funny how somethings so scary or chaotic at the moment can be laughed at in the end.

Commencement was a great time. We had a nice pick-nick outside at the pavilion and afterwards we held the commencement ceremony in the chapel. It was interesting to experience the ceremony from a different perspective as a staff member. Oh and not to forget, the night before we had a wonderful sharing time. Many people shared about their growth or in what ways they experienced God working. It was very uplifting.

These last days were also long days. We have the tradition in Ekhaga to celebrate birthdays of the the guys who have their birthday here at Holsby. This year we also celebrated the birthdays of the guys who had their birthdays on another date. So for the last three nights we stayed up till around 00:30, but it was very nice. The guys all shared wonderful experience they had with each other and it was a nice way to end the year. In the meantime I also wanted to write a personal note to all the guys with my prayers for them this together with writing in all the yearbooks of the girls made for some packed days. But we got it done! There were definitely some things I would still have liked to do, but that’s alright.

My wonderful parent drove all the way up to Sweden to come and bring me home to the Netherlands. I had around one week time left after the Students left to spent on packing and hanging out with my friends. It was a good goodbye and felt at peace leaving Holsby behind. I think there was a comfort in the knowledge that I could come back anytime and that most of those friends would still be there. As of writing this I’ve been in there Netherlands for around two weeks now. It’s been great! I’ve been able to see my friends and family and slowly starting to work on the future.

I often get asked if I would want to go abroad again. I most definitely want to, but right now I think it’s important for me to spent time with family and build up a future here. So I will stay in the Netherlands for the foreseeable future. In terms of career and future ministry, I plan on setting up my own freelance business where I want to make website for clients. The target demographic would be non-profit / Christian organizations and churches. I hope the be able to contribute to the Lord’s kingdom with my profession in this way. I think that in the process of developing this business I will start doing some part time work at a another business first as I also want to make progress on moving out of my parents house.

I wanted thank all you who have supported my through your prayers. I have definitely needed it at times. Some of you have also been supporting me this year financially as I have been volunteering at Holsby. I wanted to thank you so much, I really appreciate the gift. I would also like to mention that if you are still making monthly donations that you should stop them. My ministry is over and will soon be earning my living again the usual way.

Let us know; let us press on to know the LORD;
his going out is sure as the dawn;
he will come to us as the showers,
as the spring rains that water the earth.

Hosea 6:3 (our theme verse of this year)

All thanks be to God for the wonderful time he has blessed me with at Holsby and the growth I have been able to experience there!